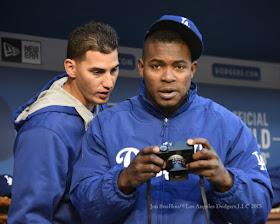 Oh, Boy!  I'm hoping that this is all hyperbole.

Via Jeff Passan ay Yahoo Sports, "Book: Disdain for Yasiel Puig by Dodgers teammates no longer a secret," he recounts several transgressions of the enigmatic Yasiel Puig, and it ain't pretty.  In fact, it's horrible... And disheartening... And makes me want to take back anything I've written that defends him.

Based mostly on Molly Knight's upcoming book "The Best Team Money Can Buy," Passan passes along several stories that should have Dodger fans worried.


While some issues, like his habitual tardiness for games, have abated this year, according to sources, Puig's work ethic in batting practice and the weight room continue to bother some teammates. Much of the hostility stems from a general sense of entitlement shown by the 24-year-old. During spring training this year, as Knight writes and multiple sources confirmed to Yahoo Sports, Puig argued with teammates over who should be allowed on a plane ride that typically includes wives and girlfriends. The subject of someone from Puig's entourage joining the traveling crew came up, and sources told Yahoo Sports that Puig argued with pitcher Zack Greinke and nearly came to blows with infielder Justin Turner over the matter.

Greinke, the National League ERA leader and one of the game's best pitchers, was at the center of another memorable Puig moment related in Knight's book. In 2014, during the Dodgers' annual trip to Chicago, the team bus stopped downtown to allow rookies undergoing hazing to walk into a pizza place and emerge with food for the veterans. Some Dodgers players, not wanting to wait, skipped off the bus. When the bus was ready to leave, Puig was outside, looking for his luggage inside of the bay underneath the bus. After Puig ignored multiple requests to close the luggage bay, Greinke hopped off the bus, grabbed the suitcase in front of Puig and chucked it onto Michigan Avenue. Puig stepped toward Greinke and was restrained by reliever J.P. Howell.

You gotta check out the rest of it.  There are a couple more interesting anecdotes and stories that'll make you squirm.

On a side note, now I'm wondering if there are any juicy tidbits about the "owner who shall not be named" in her book.  There's gotta be some great dirt on that wonderful family.

BTW, Knight's book comes out on July 14th.  The photo at the very top via Jon SooHoo/LA Dodgers 2015.

2015 Leaf Heroes of Baseball - All the Dodger Cards

For whatever reason, I had totally forgotten that Leaf Trading Cards existed.  They're a second tier trading card company that, of late, rarely puts together a set notable enough to pay attention to.  In fact, I cannot honestly say that they've created anything worthy of a Dodger collectors attention this season.  Nevertheless, since I'm a bit of a completist and I want to share all, if not most, new Dodger cards made today then I've got to include this set.

Featured here are the Dodger cards found in their 2015 Leaf Heroes of Baseball set.  Go here for a complete checklist.  As you can see, there are no team logos.

A complete set consist of only 60 cards and they are sold in only blaster form at local retail stores.  Of special note, each blaster box of 20 packs includes a Stan Musial autographed card.  Yes... You heard that right.  A real Stan Musial autographed card is included in every box.  You might normally think that this is an awesome deal, but it really isn't.  All of the signatures come from the twilight of his life, and they all exhibit extremely poor penmanship as a result.  A signature that is noted for being ornate and beautiful looks more like an illegible scribble on these cards.  Still, it's Musial, so many collectors might not mind.  Check out a sample here. 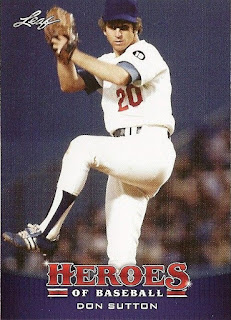 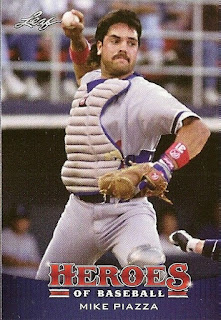 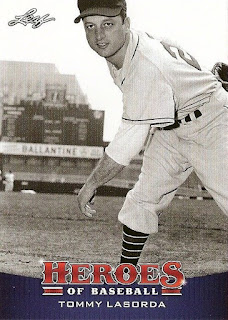 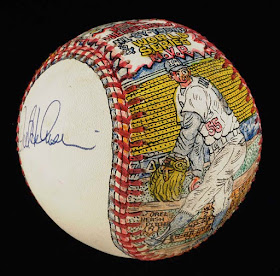 George Sosnak is the king of the "painted ball" as an artistic medium, so whenever an example pops up featuring a Dodger player I have to share it.  Available at Hunt's current MLB All-Star FanFest auction is a grouping of original Sosnak Baseballs from his estate, and featured above is an unfinished 1988 LA Dodgers World Series ball showcasing Orel Hershiser on a panel.  Check out the auction here.

Per the auction description:


Hand painted baseball decorated across two panels with "1988 World Series Champions" decor on one side and MVP Orel Hershiser on the other panel. The adjacent side panels has been signed by Hershiser in blue ink rating 8 out of 10. Other side panel has faded signature of Tracy Woodson.

I do not know why Tracy Woodson's signature is on the ball.  He didn't record a hit in four at-bats during the Fall Classic, but he was an instrumental piece of the vaunted "Stuntmen" bench corps that helped drive the club to a championship that season.

Of special note, numerous unfinished examples of Sosnak's work have recently made it onto the market.  When he died in 1992 a large cache of Baseballs that he never got around to completing were found.  The ball above is one of those balls obtained directly by a Sosnak family representative and offered here for the first time.


George Sosnak was one of the earliest recognized artisans to use a Baseball as his medium.  In 1956, during his time as an umpire in Pioneer League, he fulfilled a fan request for a painted Baseball.  Soon, his work became legendary, and everybody under the sun requested his work.  Notably, he rarely turned down a request, and often gave the balls away as personal gifts.  Sure, he got paid from time to time, but that wasn't his motivation.  He needed an outlet, and painting on Baseball's became it.

His work can be found at the National Baseball Hall of Fame in Cooperstown, the American Folk Art Museum in New York City and the John F. Kennedy Presidential Library (it includes a ball commemorating JFK’s Opening Day pitch at a 1962 Senators game).

All said, he has painted at least 800 Baseballs; while other estimates put the number as high as 3,000.  Dave Bailey wrote a great article about George Sosnak at Sports Collectors Digest that is worth a read.  Check that out here. 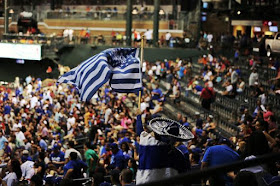 Dodger Nation sure did show up in Arizona last night.  Unfortunately, not all of the Dodgers did.

The bullpen was dismal, Mattingly had a bad feeling in the pit of his stomach and Mike Bolsinger likely puked in the clubhouse.  Via Barry Bloom at MLB.com:


"It's not a good feeling. This is probably about the worst I've felt after a game all year," Mattingly said. "It was disappointing that we got a lead and we didn't hold on to it."

Imagine how Bolsinger felt. Mattingly knew as the game began that the right-hander was experiencing queasiness and cramps, the cramps reaching a crescendo as he worked through a three-up, three-down fourth inning.

Mattingly said he thought about sending Bolsinger out there again in the fifth, but he opted instead to pinch-hit Alex Guerrero with runners on the corners and two out in the top of that inning. Guerrero struck out. Bolsinger was replaced by Joel Peralta and thus began the cavalcade.

"It was tough, I feel bad, taxing the bullpen like that the first day of the series," Bolsinger said afterward. "You never want to do that. The bullpen has been so good all year. Not only tonight, but I feel like in past outings I've taxed the bullpen. I've got to figure out a way to go deeper into games. I know I can do it."

The phot above via @Dodgers on twitter.  Below are some links to check out:


Diversity seems to have been part of the formula. They have hard throwers in Jansen, Pedro Baez and Adam Liberatore and finesse pitchers in Joel Peralta and J.P. Howell. They have also kept the group in constant flux, bringing fresh arms from Triple-A whenever there is an opportunity to make a roster move. 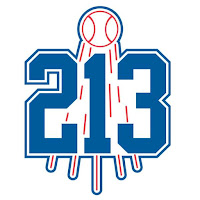 The Dodgers reportedly signed Abdullah to a bonus of $647,500, of which $547,500 counts against the Dodgers bonus pool since Adbullah was picked outside of the first 10 rounds. 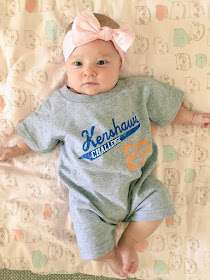