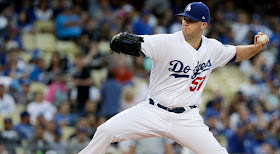 Last night, the Blue Crew held off the White Sox until the inevitable rally began. Per Cary Osborne at Dodger Insider:


“Kind of a weird night,” Wood said. “I didn’t feel like I had my best stuff. We made some (good) pitches. It’s a kind of an interesting dynamic became they’re one of the most aggressive teams in all of baseball, so it was a lot more of my secondary stuff, and I feel like we were able to command that for the most part and made some pitches and they put the ball on the ground and in the air. … I just had to hold us in there till we got that offensive explosion.”

Soon, a bases loaded hit-by-pitch drives in the go-ahead run and opened a floodgate that eventually lead to four more runs crossing the plate.

Pic above via SportsNet LA on twitter. Below are more links to check out:

“The communication from Andrew, Farhan (Zaidi) and the multiple GMs around here is extremely comfortable,’’ Dodgers veteran pitcher Rich Hill says. “It’s not like, 'Oh, wow, I can’t talk to him because he’s the president or the GM.' There are no barriers or walls. The level of respect is there for everybody, and you just don’t find that in every organization. Hopefully, other organizations will look at this as a model for everyone.’’

Make no mistake, this is an organization that thrives on data. Players are given charts before each game on everything from defensive positioning to opposing pitchers’ tendencies to secretive injuries. Catcher Yasmani Grandal has a color-coded cheat sheet on his wrist band. Outfielders carry index cards in their back pockets during games, reminding them of their defensive placement. Players are given access to a proprietary statistical website.