A couple weeks ago I highlighted an original Norman Rockwell drawing featuring the Dodgers that is currently on auction at Heritage. With just days before the end of that sale I thought I would point to a some more Dodger memorabilia that I thought were cool.

For instance, check out the above twenty-one-pound slab of Italian white marble above. (auction link) As you likely guessed, it once resided in the Brooklyn Dodgers former home, Ebbets Field, and it's story about how it still exist is fascinating. Per the auction description:


Before a wrecking ball--painted at the whim of a dark humorist with the white hide and red stitching of a baseball--swung the more dramatic blows in wiping the Dodgers off Brooklyn's map, any contents of monetary value were salvaged. Seats were unbolted and hawked for five dollars each. Discarded bats and photos were sold at auction. And, as the exterior walls of the grandstands fell, the valuable white marble of the rotunda was carted off and repurposed in the Tri-State area's inexhaustible rush of progress.

It was a little over thirty years after Ebbets Field was reduced to rubble that the offered relic reappeared at a construction salvage auction in a field in New Jersey, fewer than ten miles from its original home. A handwritten letter from the auction attendee reports that the offered slab was stacked in a pile of marble he was examining for table tops, and that he secured the lot after a short bidding war with another man, retaining it in his own Brooklyn home for the next quarter century.

It's unbelievable that this slab didn't immediately find its way into a collectors hand. It's even more amazing that the salvage auction, some 30 years later, didn't notice the significance of the piece. At the time of this posting this piece of marble is at $32,000.

The final item below might not include an actual 1988 Dodgers World Series ring, but who cares? It's still a relic from the last Dodger championship. Featured is an original cherry wood presentation box that once held a World Series ring. Unfortunately, there's no indication whose ring this was for. (auction link) 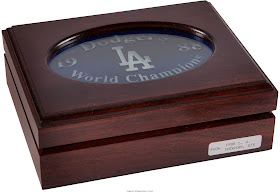